GERMANY – After German government passed its historic new law allowing same-sex marriage, the first couple Karl Kreile and Bodo Mende from Berlin, captured worldwide attention as being crowned the first two men to have become the first gay couple to marry in Germany. The timing couldn’t have been more perfect as they celebrated their wedding day on the first day of the new gay marriage law. 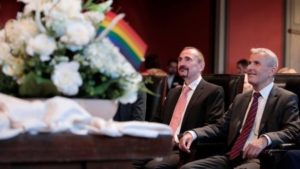 After being a couple for 38 years, Karl Kreile and Bodo Mende (pictured right) exchanged their vows at the town hall in Schöneberg, Berlin.

As expected, the Registry offices in several German cities were opening their doors in an unusual move on Sunday so that gay and Lesbian couples can get their marriage license to wed on the first day gay marriage becoming legal in Germany.

As here in the United States, allowing gay marriage will give LGBT citizens the same tax advantages and adoption rights as heterosexual couples throughout the country.

While Germany has allowed same-sex partners to register as partnerships since 2001, it has taken 16 years to achieve the same status as heterosexual marriage.

The German parliament voted to introduce marriage equality in June, after Chancellor Angela Merkel surprisingly dropped her longstanding opposition to parliament holding a vote on the issue. Bundestag vote & Bundesrat approval came in at 393–226, with 4 abstentions and 7 absentees. Bring the total to a 62.4 percent approval vs 35.9 percent in opposition. Truly a day that will be remember in our history. But remember there is much more to do and we are doing it.