Videography, passion, acting skills capped off with a climatic gay erotica orgasm that one can only imagine being fulfilled with. That is what you are going to find when you watch “Introducing Jack Donovan” (2017).

Already cocky and comfortable with the camera, Donovan is a dick licking marvel. He goes between Brady’s bone and handsome face, worshipping both equally before planting his ass on Josh’s fuckable face. Brady wants to get deeper and orders the boy on his back, legs in the air and then goes to tongue fucking town on Jack’s hungry hole. Josh slides his hands, rough from working out inside the boy’s butt, then offers him a seat on his hard cock. Jack jumps at the chance, then bounces his beautifully round, smooth booty down bareback till it’s completely full of cock. Brady flips the cock control and gets Jack on his back.

He pile drives his raw rod hard and deep, making sure our newbie gets the full treatment. Donovan enjoys every thrust, allowing his perfectly proportioned, rock hard cock to sway a bit before grabbing it as it’s about to go off! Pretty boy shoots a nasty nut all the way up to his neck, causing Josh to aim for the fences too! Well, more like the FACE! Brady’s fills his conquest’s mouth, then kisses the kid full on the lips, enjoying the taste of his own hard work.” 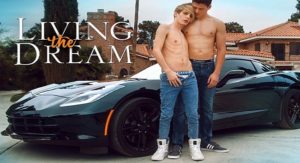 You Drive Me Wild: Caleb Gray, Kane Fox is Electrifying

Introducing Chris Peyton with Hayden Lee Is A Scorching Must Watch