“I’m so excited about my first release from Icon Male,” said Chi Chi LaRue. “Watching the great movies that Icon Male produces and the taboo themes is right up my alley, and I hope to create more sexy adventures for them.” said LaRue.

The tale of a young man’s wild road trip as he discovers his true desires, Finding Father stars newcomer Danny Gunn and the ultimate father figure Kristofer Weston, and releases on DVD today.

“Having newcomer Danny Gunn and seasoned vet Kristofer Weston made this project that much more special,” said LaRue. “I found Danny on Twitter and when he agreed to do this, I was very excited. This is his first feature and I see great things for this sexy young man. Kristofer has been behind the camera for a while and recently just started doing scenes, so I’m lucky to have him. The rest of the cast headed by superstars Michael DelRay and Dane Stewart make this the perfect movie.” said Larue.

Synopsis:
“Finding Father presents newcomer Danny Gunn, as he looks for his stepfather. It’s been five years; he needs to get something off his chest. Danny and his best friend, Michael DelRay, head out on a road trip adventure to find Kristofer Weston, Danny’s stepdad.

“We are so pleased to welcome Chi Chi LaRue to the Icon Male family,” added Jon Blitt, Mile High Media’s vice president. “Having him write and direct for us and add his own twist on our taboo content is exciting. We know fans will love his debut release, Finding Father.” said Blitt. 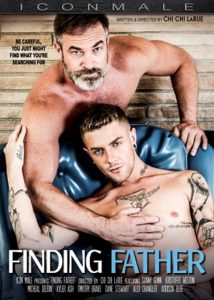