BORONIA, MELBOURNE — Knox police say that a robbery suspect armed with a shotgun was no match for an adult store manager who decided to surprise the armed robber with a massive machete which he was able to strike the suspect with twice.

Police further said the adult store manager swung the machete and made contact twice with the suspect’s head before the suspect fled the scene through the store’s back door.

The incident took place at the Night Moods Adult Store located at 1/144 Boronia Rd in East Melbourne around 7.20pm on Friday, August 4.

Detective Acting Senior Sergeant Adam McFarlane added…”The would-be robber entered through the rear entrance wielding a sawn-off shotgun. “The man allegedly pointed the gun at the manager and demanded drugs.” said McFarlane. “The manager pulled out a machete and struck the suspect twice leaving the man with serious head injuries. The robber then ran off through the back door and fled in a car.” said Senior Sergeant McFarlane.

Sergeant McFarlane added…“He later attended hospital of his own accord and had treatment.” said McFarlane.

The Knox police department’s Special Operations Group tracked the armed suspect and arrested him 10 days later outside of the Maxi Foods Supermarket on Burwood Highway on Monday, August 14.

The 46-year-old Knoxfield suspect appeared before the Melbourne Magistrates’ Court on August 15 and was held without bail until a further bail application on August 28.

According to Senior Sgt McFarlane, the Night Moods adult store manager was defending himself and was not being investigated.

The manager said that he was physically uninjured but was still battling the emotional toll after the horrific incident.  The manager is back at work but said he was not ready to talk about the incident at this time.

Lucas Knight Delivers A Superb Performance In Men On Edge 61

When the Bells Ring Is A Sensual Thriller from SauVage 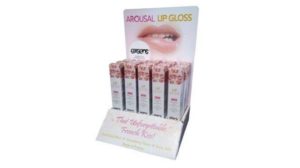