LGBT POLITICS – WASHINGTON, D.C — President Donald Trump is getting major backlash by critics for what many including the military, politicians and constituents over his display of hypocrisy during the president’s Monday night address at the Joint Base Myer-Henderson Hall.

“When we open our hearts to patriotism, there is no room for prejudice, no place for bigotry and no tolerance for hate,” said Trump to the U.S. troops while reading from his teleprompter.

You will recall that President Trump last month issued an order on twitter which doesn’t hold any legal ground, banning transgender people from serving, which critics said amounted to nothing more than simple bigotry.

Many called out president Trump’s statement against “bigotry” in the military as laughable:

President Trump says there is no room for bigotry in military address, weeks after issuing a ban on transgender service members.

Trump said this while ignoring his own discriminatory policy discriminating against #Transgender soldiers. What a joke pic.twitter.com/n9QIMUF65R

Trump: “the military cannot be clouded with prejudice and bigotry” 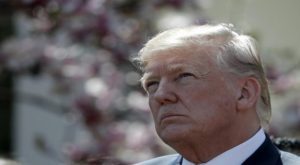