SAN FRANCISCO, CA — Legendary powerhouse Falcon Studios has launched the official Route69XXX site, a dedicated website for the latest blockbuster produced to mark the studio’s 45th anniversary year. Route 69 was conceived and directed by award-winner Tony Dimarco, and it was inspired by classic Falcon scenes that span four decades. Dimarco skillfully navigates the vaults of classic Falcon scenes, giving them a modern twist.

The Route69XXX site is live today to mark the movie’s August 11 release date, and fans can view trailers of the full movie and individual scenes, and check out model and action galleries. They can also purchase the Route 69 DVD, downloads, soundtrack and T-shirts on Route69XXX.com or in the Falcon Studios Group Store.

Along the way Fane and Dustin get intimate with the likes of Nate Stetson, Johnny V, JJ Knight, Derek Maxum, Ryan Rose, Alex Mecum and Skyy Knox. And at the end Dustin makes a move and the two create their own steamy session.”

The original soundtrack of the movie was composed by Remixlab, and Route 69 limited-edition T-shirts were created and produced by ajaxx63 especially for the release. Fans who purchase the DVD will automatically receive $10 off their T-shirt, which retails exclusively through Falcon for $19.95 each and is available in red, black, navy blue and white. 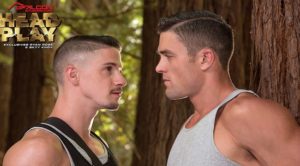 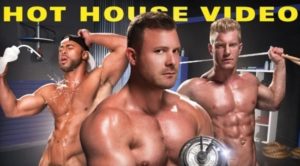 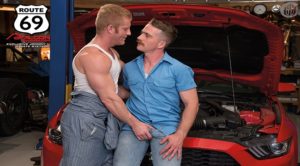