PICAYUNE, MS – A gay man who is in mourning has filed a discrimination lawsuit against a funeral home who allegedly refused to transport and cremate the 82 year-old’s husband’s body after learning that he was gay.

John “Jack” Zawadski, 82, and his nephew filed the lawsuit with the assistance of Lambda Legal following the death of Zawadski’s husband Robert Huskey in May 2016 who died of a heart condition.

The lawsuit alleges that as Huskey’s condition worsened, Zawadski’s nephew, John Gaspari, was making funeral arrangements for transportation and cremation of Zawadski’s body through Picayune Funeral Home located at 815 S Haugh Ave. This has been an horific ordeal for the family as Huskey and Zawadski had been together for 52 years at the time of his death. 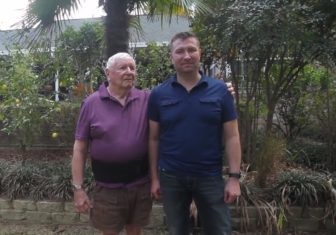 According to the lawsuit, following Huskey’s death “the Nursing Home relayed to John that once PFH received the paperwork indicating that Bob’s spouse was male, PFH refused service because it did not ‘deal with their kind.”

“When you’re finally told that a loved one is on the end of their life, you don’t want to have to be rushed into making a decision,” said Lambda Legal official Gaspari. “You want to make sure that it’s carried out to their wish and it’s done properly, with dignity… Discrimination in death is unacceptable. I’m hoping that laws are changed prohibiting this from happening anywhere in the United States.” said Gaspari.

Unfortunately, there are no laws protecting LGBTQ people from discrimination based on sexual orientation by businesses in that red state of Mississippi. Lambda Legal attorney Beth Littrell told members of the press this particular caes serves as an example of what can happen when legal protections don’t exist for the LGBTQ community.

“This case is a stark example of the harmful consequences of living in state without anti-discrimination laws that protect LGBT people and where the state government instead passes laws like Mississippi’s HB 1523 that privilege those who discriminate instead of protecting the victims of discrimination,” she said. “It shows that even though same-sex couples can marry throughout the country, they remain vulnerable to discrimination from cradle to grave.” said Gaspari.

We attempted to contact a spokesperson for the Picayune Funeral Home for comment on this article but did not receive a call back or email with a response. Should we receive one, we will update this article accordingly.