Controversial Philippine President Rodrigo Duterte, came out and said that he now opposes gay marriage after previously stating that he would consider legalizing the statute.  Mr Duterte claims that he has “nothing against gays” followed up by claiming that he has several relatives that are homosexual.

Are we once again dealing with a lying politician who says one thing and does another once in office?  President Duterte back in 2015, supported LGBTQ saying that same-sex marriage was a good thing but now, it appears that he is back tracking big time on his previous statements.

In his meandering speech critising his now-suspended war on drugs, Mr Duterte accused the United States of imposing its values on the Philippines.  He then went further by stating that the American media has an obsession with the LGBTQ community and gave Tim Magazine as an example of his concerns by highlighting the iconic magazine articles on the transgender community in the United States.

“There is no gender because you can be a he or she… That’s their culture.” said Duterte.  “It does not apply to us. We are Catholics and there is the Civil Code, which says that you can only marry a woman for me… a woman to marry a man.  That’s our law so why would you accept that gender?” said Duterte. “Wherever God placed you, just remain there. Do not mix it up… You erase the great divide between a woman and a man. ‘Everyone deserves to be happy’, said Duterte. 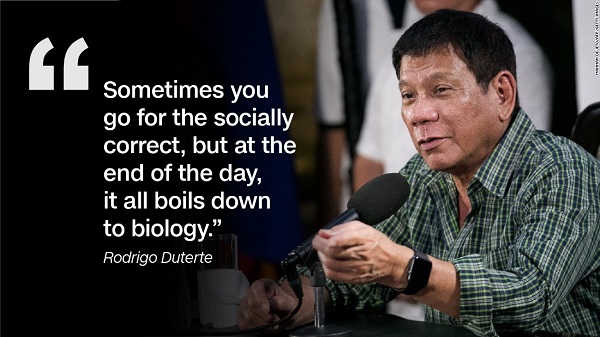 The Philippines has 80 million Catholics and remains a deeply religious society which means that a good possibly as to why the 360 degree turn on gay marriage, may be that the church used its political influence to change the mind of the controversial conservative president.