The push for allowing same-sex marriage started last year at the 2016 Annual Conference of the Church’, which nearly three quarters of Norwegians reported in 2015 they belonged, were strongly in support of the principle of same-sex marriages however, at that time, could not come to an agreement on the language for the new rule. 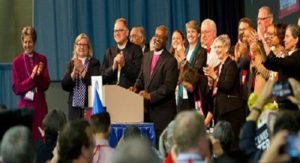 Monday’s debate and vote involved modifying the church’s marriage wording to make it for the first time, gender-neutral. The church removed the words “bride” and “groom” replacing it with, new liturgy which will go into effect on Wednesday February 1, 2017.

The expansion continues since 2015 when the French Protestant Church allowed gay marriage blessings. Then there was the U.S. Presbyterian Church that approved a change in their wording of its constitution to include same-sex marriage ceremonies.