LOS ANGELES, CA — The JockMenLive network has reported serious continued success with a recent campaign focused on encouraging direct social engagement, rather than a lonely user experience, which has allowed this site to tap into a largely unengaged pool of potential customers.  This is something that news media outlets including JRL CHARTS has been engaged with and it truly is a winning formula as reported by JockMenLive.

“The number of members embracing our brand new on-site social and dating features has been growing at a viral rate,” said Shaun of JockMenLive. “As growth continues to double and re-double each month we are seeing a stellar 47 percent conversion ratio and a 36 percent re-engagement rate because we have stopped treating our audience as ‘traffic’ and started to focus each member as co-creators of their own community.” said Shaun.

“We’ve spent a lot of time speaking directly with our customers, testing new features and tracking their response to our new products,” said JockMenLive CEO, David.  “What we found was this: members can get cam shows for free or on Skype. What they want is a place where they can become part of a vibrant community, interacting with other muscle fans, and making new relationships. Some of the added core social features were directly requested by our fans. Once these guys start using our social features, they’re hooked. Plain porn is too passive for the most part. Customers on cam sites—particularly niche sites like JockMenLive, are looking for relationships. Video chat is inherently social, it’s based on interaction and most of those interactions are not sexual. Our members are muscle fans who may be too shy to talk to their current object of affection—they crave a community where they can talk about the men they truly love openly. We give them the men and the community of other fans as we nurture and monetize those relationships via JockMenlive.” said David.

Shaun added..”The social features on JockMenLive include muscle forums where members can interact with each other and site performers. JockMenLive also features member profiles, where members are free to post their own photos or videos. Members can even broadcast their own shows. Facebook style news feeds encourage deeper levels of engagement, and dating-like features help members connect to make friends with other members who have similar interests, attitudes, culture and tastes. “We are not a porn site, JockMenLive is a community site where you can make your own fantasies happen,” explained Shaun. “One of the things we love most about our social features is that we can speak to our members directly and we let them lead us to an extent rather than telling them what they should want.” concluded Shaun.

Engaging with more than 300 models, 15,000 members and publishing several thousand clips for sale in less than a year has not been easy, but it’s a business model that is outpacing growth trajectories across the industry and one that can be replicated by other forward thinking business owners. So much so that JockMenLive is now planning on attacking new niches and even the mainstream non-adult market.  Now, to begin working with the JockMenLive team email Sales@JockMenLive.com. Follow the JockMenLive network daily on Twitter. 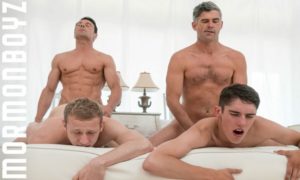