HOLLYWOOD, CA — For this reporter, I don’t know anyone who doesn’t have on Timer or watching live, Dan Savage’s ‘The Real O’Neals‘ on ABC every week to see what new sensation Gay star Noah Galvin is going to do next. 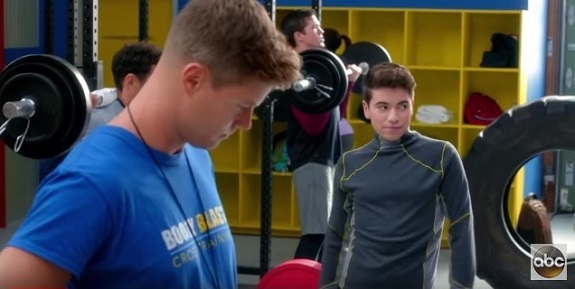 Well this past week’s episode  S2 EP7 “The Real Fit”, was hilarious as Kenny (Noah Galvin) joins a crossfit gym with his mom Eileen (Martha Plimpton), and totally gets the wrong concept and might I say stereotype scenario of what he can look forward to in a gym full of hot guys of all genres.

What makes this episode superb is that the episode takes us back to the 80’s with the fantasy of “Let’s Get Physical” music video while at the same time delivering a Star Trek “The Next Generation” form of a “holodeck” set.

The scene is totally loaded with oiled up jocks working out those muscles while Nopah Galvin parades around them gazing at those hot bods!

Watch this sensational episode and see how reality hits Kenny in two spotlight segments.  Make sure that you have ‘The Real O’Neals’ on record at all times! Plus follow Noah Galvin daily on Twitter.